The two verses of the song “Spring on DK rigs” describe part of the difficulties and hardships that soldiers on DK1 rigs face when performing the task of protecting and preserving the Fatherland's sovereignty over its sea and islands.

In serving their duty, every DK1 soldier must overcome dangerous storms in the middle of the sea at least once. Through the words of Lieutenant Colonel Nguyen Van Lam, who has worked at five DK1 rigs, many would be surprised by the bravery of the naval soldiers on the sea platforms.

For Lieutenant Colonel Lam, his most memorable moment with his teammates was of carrying out their duty to protect the DK1/9 Rig at the terrible destruction of Typhoon Tembin in late 2017. In a slow voice, the experienced soldier described in detail the horrific destructive power of the historic storm, but surprisingly, in the story of Lam, there was no word to describe fear or deterrence. 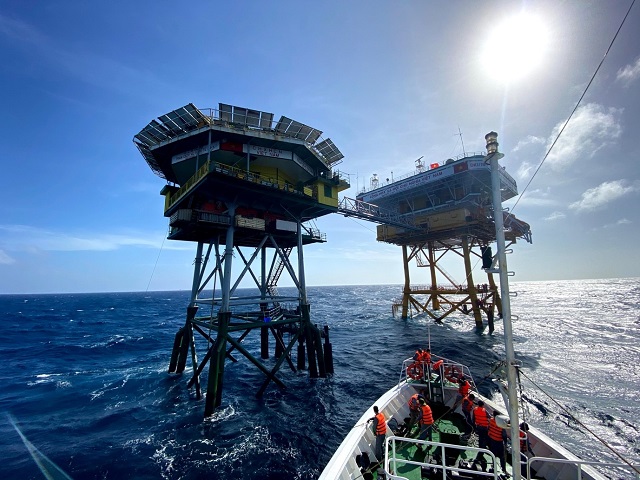 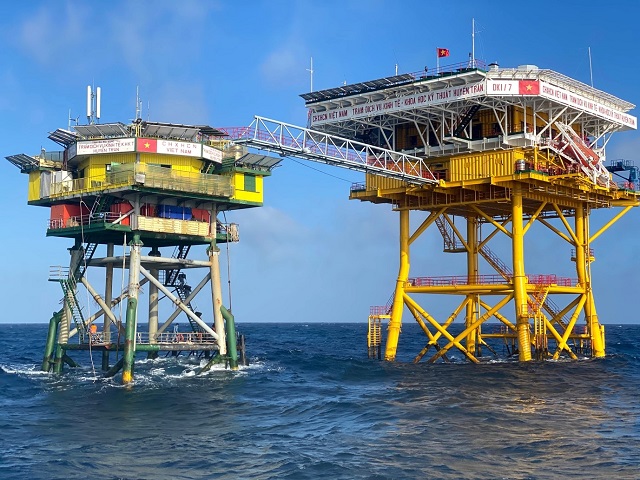 When asked about the mood of Lam and his teammates at that time, the reigning commander of the DK1/20 Rig just smiled: "We had prepared plans and taken precautions in advance. Against any powerful storm, our spirit must be strong and not to show nervousness or fear. After the storm dismissed, we were all happy to see the disaster tolerance of the current generation of DK1 rigs. The platform is still standing against strong winds blowing at up to Level 11-12 [on the Beaufort wind force scale], just like a reliable fulcrum for us to be assured during our missions." 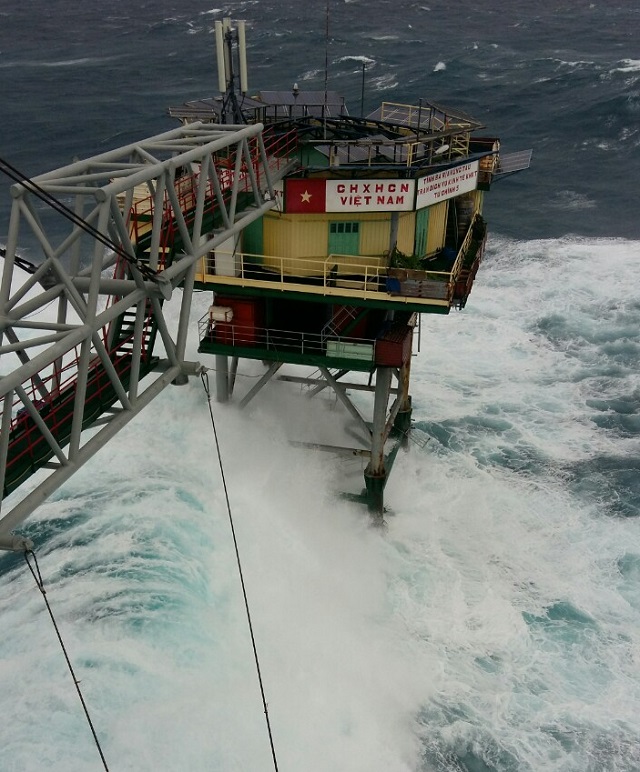 Waves tens of metres high pour through a platform during a storm. (Photo: DK1 Battalion) 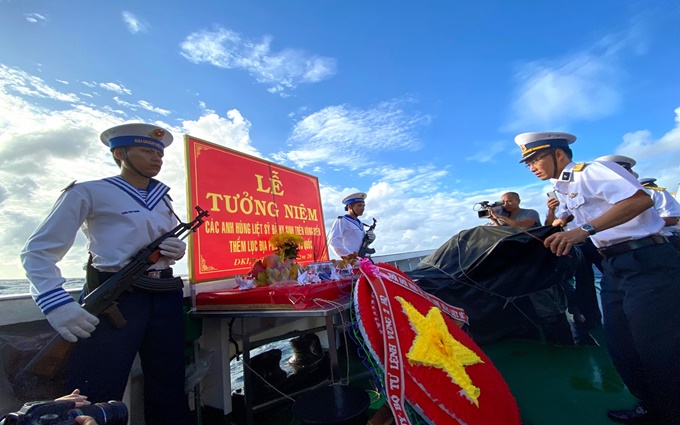 Powerful storms cannot degrade the morale of naval soldiers, but when the spring comes along with the nation's traditional Lunar New Year (Tet) Festival, DK1 soldiers still sometimes feel sadness. Having nearly 30 years of experience in the army and having welcomed many Tets in the Spratly (Truong Sa) Archipelago, Lieutenant Colonel Lam was still surprised and felt unbalanced when he first welcomed Tet at the rigs, because all their activities happen within a lonely architecture isolated within the deep blue ocean. However, as the commander, he is always determined to say to himself and his teammates as: “Coming to DK is just like going back home.”

Now, it is no exaggeration to say that his DK1 rig is a home and Lam’s teammates are like his second family. Living, studying, working and fighting are happening all on the rigs, which requires each soldier to have two sentimental feelings in parallel: teamwork and brotherhood. For that reason, the commander, in addition to asserting the leading role in combat, must also live as an uncle and an elder brother in the family to unite all the individuals in the unit. 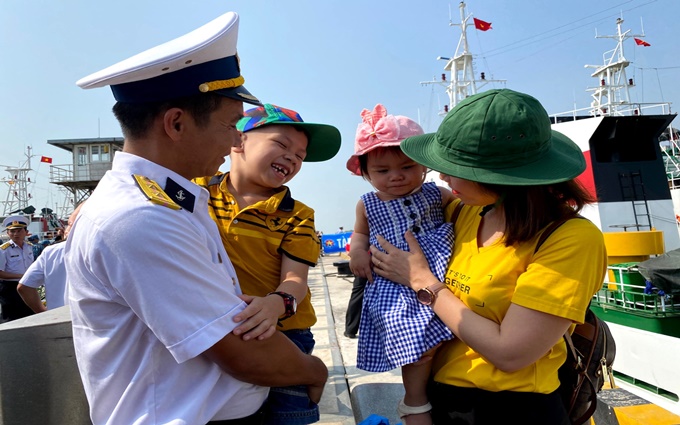 A soldier bidding farewell to his family members before taking on duty on the DK1 platforms. (Photo: NDO/Mai Nguyen) 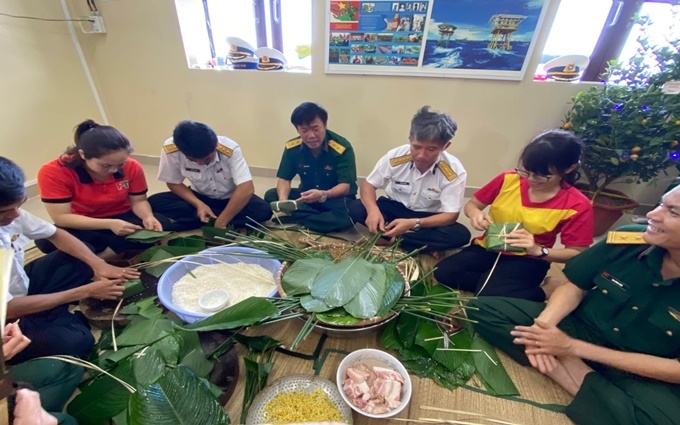 For young soldiers who have their first Tet far away from home, the encouragement from officials and soldiers who have worked for a long time on the rigs has always been extremely meaningful, which helps encourage soldiers to understand the importance of the task of protecting the nation's sovereignty over its sea and islands, as well as the special role of the DK soldiers.

To become a soldier on duty in the immense sea, each DK soldier, in addition to always thoroughly grasping the important task of protecting the country's sacred sovereignty over its sea and islands, must also meet many other criteria, such as physical strength, enduring stamina and good morale for relentlessly learning and practicing under President Ho Chi Minh’s moral example. 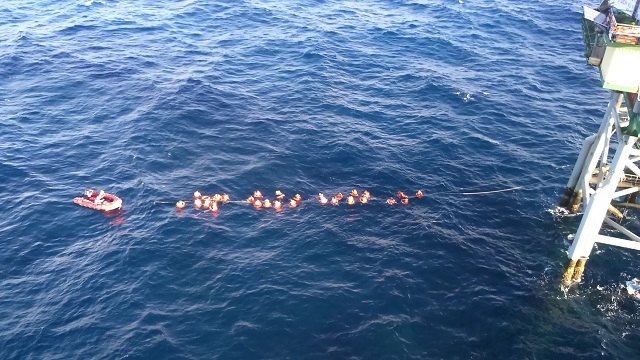 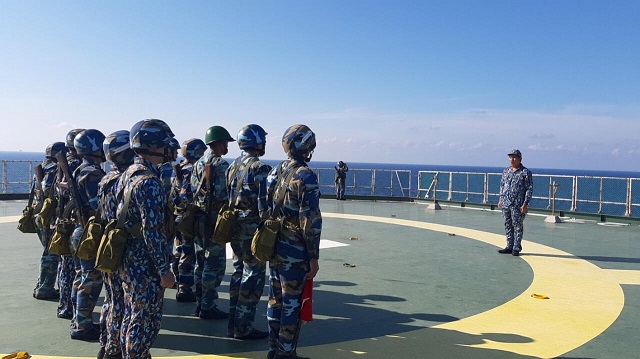 Officers and soldiers on a DK1 rig prepare for a mission. (Photo: NDO)

Celebrating Tet is a mission

For Major Phan Cong Phung, Political Instructor of the DK1/16 Rig, organising a happy and warm Tet for soldiers is also an important task, because it is an activity to enhance solidarity among soldiers in his unit. Even during celebrating Tet, the combat readiness must always be at the forefront. Phung said: "We have determined our mission well. Wherever we are, we are always united to organise a warm, safe and economic Tet, in line with ensuring combat readiness of the highest level."

At DK1/16 Rig in particular, and all 15 DK1 rigs located on the nation's southern continental shelf in general, before the Lunar New Year Festival, logistics are carefully prepared. In addition to the supplies provided from vessels carrying Tet goods, the units stationed on the rigs also directly deploy their farming skills to ensure nutritious meals for soldiers. 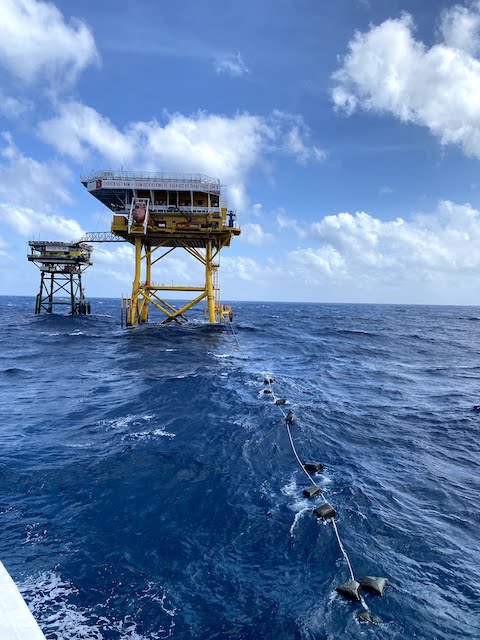 Goods tied to a rope and dropped into the sea from logistic vessels so that soldiers on the rigs can pull them up. (Photo: NDO/Mai Nguyen) 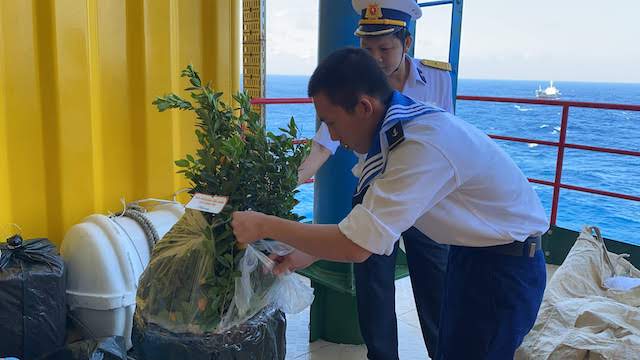 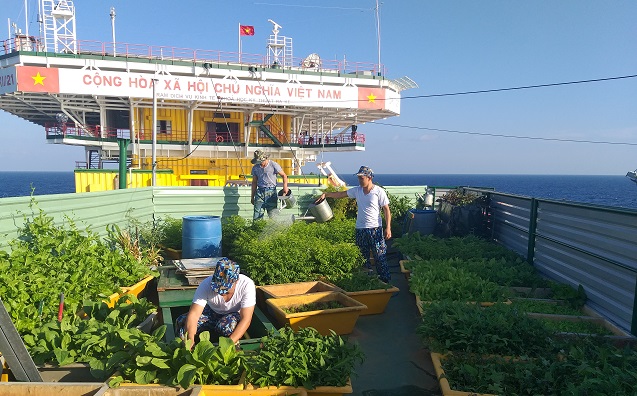 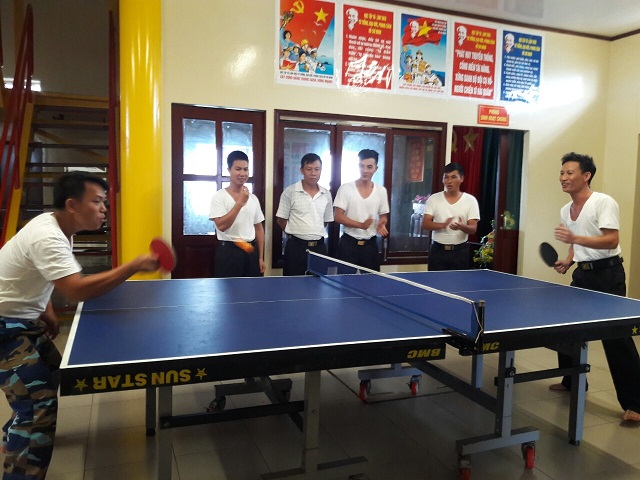 With the support and advice of senior officers, young DK soldiers always know how to strive and overcome difficulties and hardships to gradually improve themselves. Young DK soldier Le Van Gioi is among them. Having joined the army in March 2019, this was Gioi's first Tet holiday away from home, but brightness and joyfulness always exists on the face of the soldier who is in his early twenties. He confided, he just takes on his duty at DK1/16 Rig for four months. The first days on the mission were the most challenging because he got seasick. However, with the help, encouragement and guidance of his uncles and brothers in the unit, Gioi is steadily growing and becoming prouder of his mission. 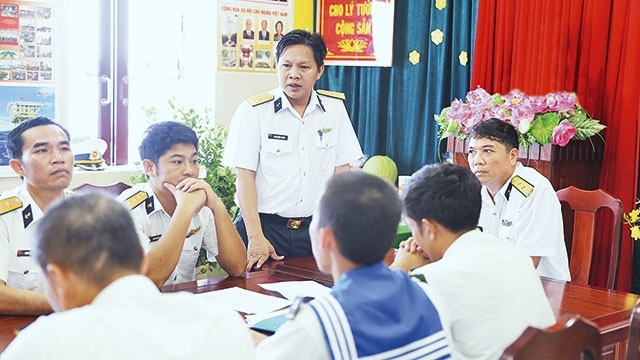 Under the guidance of Lieutenant Colonel Nguyen Van Lam, many young soldiers have grown up, among them are the commanders and deputy commanders of the DK1 rigs such as Captains Do Van Hop and Vu Duy Hoang. The trio met by chance on Ship KN261, a vessel of Vietnam Fisheries Resources Surveillance, as they received new tasks at DK1/16, DK1/18 and DK1/20 rigs on the occasion of Tet 2020. The experience of the former commander, now a colleague of Hop and Hoang, helped them in transmitting what the duo have learned from their mentor to the next generation of rookies, thus contributing to consolidating the heroic tradition of the DK1 Battalion under the 2nd Navy Regional Command.

Over recent years, under the attention of the Party, the State, the Navy and the whole people across the country, soldiers on the DK1 rigs have more favourable conditions to welcome Tet. This comes not only as important material support, but also as a source of assistance in the spiritual lives of the naval soldiers. This has contributed to creating more strength and motivation for them, so that in the middle of the new spring, at the faraway rigs isolated in the ocean, naval soldiers are still guarding the nation's sea and sky day and night to protect the Fatherland's sacred sovereignty. 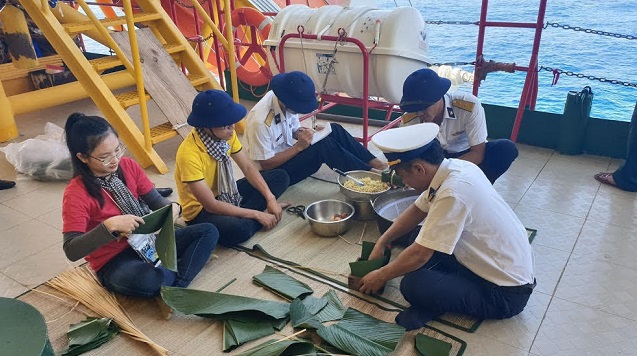 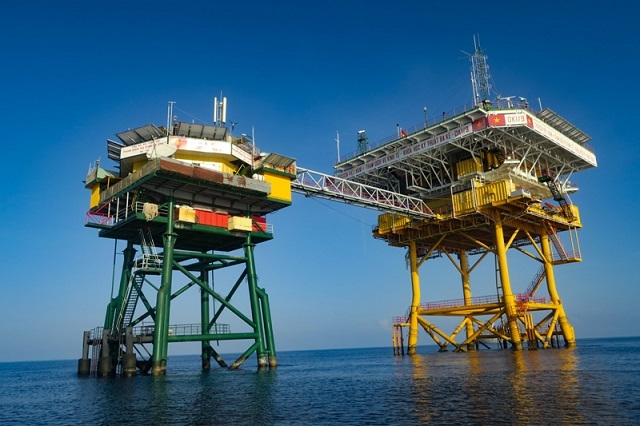 The DK1 rigs in the middle of the sea are a peaceful focal point for fishermen. (Photo: DK1 Battalion)

New vitality for DK1 Platforms in new spring have 1609 words, post on vietnamnet.vn at February 9, 2020. This is cached page on Konitono.News. If you want remove this page, please contact us.